Dillion Harper began her career in 2012. She started doing web camming and then eventually at some prodding of her fans, she sent her photos into studios and then landed an agent and that’s when her career took off. She was originally from Florida but now spends most of her time in LA.

She was the Twisty’s Treat of the Month for May 2014, a Hustler Hottie and in 2014 she was named Miss Congeniality at the Night Moves awards show.

Dillion Harper’s name is unique in that most people tend to mis-pronounce it. Often people will say her name as if it were pronounced “Dillan”. So how do you really pronounce her name? It’s pronounced as “Dill-ee-un”.  Listen below.

Dillion Harper’s popularity continues to grow. Recently she was selected as the August 2016 cover girl on the Adult Empire Films calendar, along side Scarlet Red.

Dillion Harper is no doubt known for her perky personality and big smile, but what her fans love about her most is her boobs. Most people with natural breasts like hers, well, they aren’t usually as perky.  That seems to what drives the men wild.

About a year or so ago, a rumor surfaced that Dillion Harper was a kid actor and had a role on the popular Disney show, Wizard’s of Waverly Place. You may recall that was the show where Selena Gomez got her start.

Although they do sort of look somewhat alike, it’s not true. Maxine Russo was in fact played by Bailee Madison, who is in fact 8 years younger than Dillion Harper. 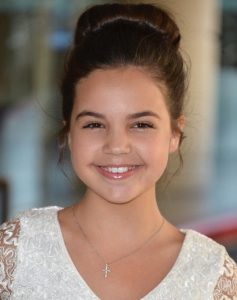 Side by side comparison is below. Not twins but they do look a lot alike. 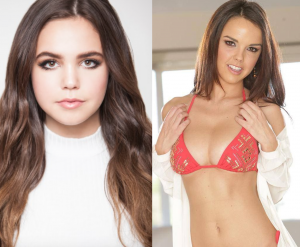 Another rumor was that Dillion Harper at the age of 13 played the lead role (Marnie Piper) in the original Disney movie called Halloweentown. That was not true either. That was actually Kimberly J. Brown. 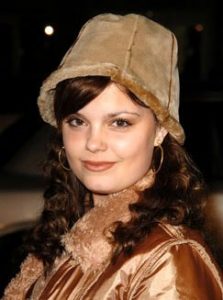 I asked Dillion Harper if there was any truth to the rumor that she was once a child actor and she laughed and said no. She grew up in Florida. She didn’t get into the spotlight until she was well over 18.

So long story short, no Dillion Harper was never a child actor nor did she ever appear on a kids show.  Sorry.

Dillion Harper said she lost her virginity at 15 and was always really sexual. Back home in Florida she recalled in various interviews how she loved to have fun sexually including once having sex on a boat dock, in a golf cart and in an elevator.